In the beginning  2019, several representatives of a Danish company, LBH International, came to Kronstadt's office in Saint Petersburg.

LBH company's main activity is development and production of expansion joints for various factories, such as cement, chemical, steel mills, and oil refineries, as well as for marine facilities, power plants, and gas turbine units. Since 1985, the company has secured reliable operation of NPPs around the world by installing its own high-tech design expansion joints.

In terms of the agreements signed earlier for design, production, and installation of expansion joints to be supplied to the largest SWNT manufacturing plant (part of Rosnano), a strategic session was planned with aim to expand the cooperation between LBH and Kronstadt.

The negotiations have defined and settled new business areas that are promising for the expansion joint equipment industry. In particular, a new contract for unique high-temperature fabric expansion joints by LBH has been initialed, opening for them the road to the Russian and CU countries markets. Such type of expansion joints has been specifically designed and included in the makers list of such renowned manufacturers of gas turbine units as Siemens and General Electric.

The parties have agreed that these high-temperature fabric expansion joints by LBH designed for gas turbine units by GE and Siemens will be supplied to Russia by Kronstadt. 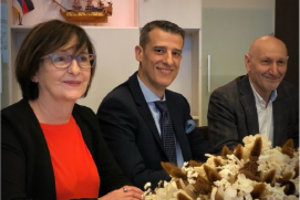